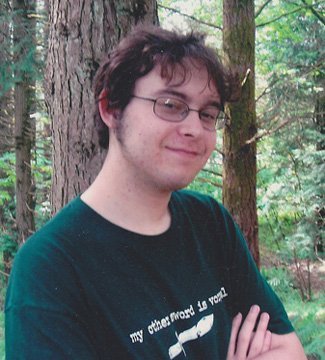 The Elliot Alexander Clarion West Scholarship is given in honor of the son of Sheila B. Auster and the late Michael S. Alexander, a graduate of Clarion West 2010.

Elliot’s faculty advisor described him as “a truly exceptional student insofar as he took seriously the idea that the authors of the great books had extended him an invitation to engage in a conversation about ultimate human questions. Elliot accepted that invitation and those of us who were fortunate enough to share time with him in a classroom got to watch him think through these ultimate questions and help his classmates and instructors do the same.” He singled out Elliot’s empathy, his strongly held egalitarian political philosophy, and his thoughtfulness and compassion.

Elliot was also recognized amongst his peers as a terrific writer and born storyteller, and they noted how he could be funny without being unkind.

His family mentioned how he valued cooperation, loathed cruelty, and that “while he could be extremely serious he had a sense of the absurd that enabled him to separate (and enjoy) the meaningless fluff of the moment from the substantial and enduring.”

At the inauguration of this scholarship they said to future recipients:

Elliot had a fine wit, a love for the underdog, and a burning sense of social justice. He also loved dinosaurs and bad puns. Like those who come to Clarion West, he was just beginning to learn the elements of his chosen vocation, taking them into himself and making them his own.

It is our hope that the recipient will do the same. Clarion is an amazing opportunity if you just reach out and grasp it. It is not to be wasted. Try to capture the essence of our son’s quicksilver personality and put it to paper in your own unique way.

We wish you calm seas, auspicious gales, and sails expeditious.