Skip to content
chemist, star-gazer, writer
gentleman and wit
he brought out the best in all of us

Michael was a member of the Clarion West class of 2010. He had a successful career as a pharmaceutical chemist before returning to his first love, science fiction.

Michael had a keen interest in many fields. He was an amateur paleontologist and astronomer and enjoyed studying history. He was a gifted teacher and a favorite during his town’s science and technology outreach events. All of this is reflected in his stories.

Michael died on December 4, 2012; a year after his son and five years after a cancer diagnosis. He had many stories left to tell.

This scholarship was established by Michael’s wife in his memory. She urges you to keep up with all screening tests that are recommended for you.

Mike As We Knew Him

He was also the kindest, gentlest, most generous of men. He saw the
best in everyone and handled life’s challenges with humor and courage.

One word I would add for Mike is grace. I don’t know where he got it
but he was the kind of guy you always wanted to be kind to, because he was
always that way with you.

‘Grace,’ is perfect. and ‘kind,’ is a word I often used to describe
him.

Mike was all of that and more; a true original.

It was the Saturday before the first week of Clarion West 2010. Excited, eager to begin the grand adventure, I had made a run to the airport (I live in Seattle, so I was already “there”) and had agreed to mind the door while Leslie, and the few other arrivals, made a quick run for supplies.

The weather was glorious, the sort of June Seattle day that makes you glad to live in the Pacific Northwest. I had the door propped open and sat just inside, waiting for someone new to come through the back gate.

Beyond the fence I heard car doors slamming, heard voices, male and female. The gate opened. Two young women and an older man came through, all dragging luggage. I took the older man for a father, come to help his daughter settle in.
Time for a bit of fun.

“What is your name?” I demanded, in my best English accent.

The two women stared at me, wondering, I suppose, who this crazy woman was. But the older man drew his shoulders back and snapped to attention.

I was expecting the women to be fellow Monty Python fans, not the older man. Even so, I plowed on.

“What is your quest?”

He grinned. “I seek the Holy Grail.”

Close to giggling, I threw out the last line.

“What is the average airspeed of a swallow?”

“African or European?” he demanded.

That began my thirty-month friendship with Mike Alexander, the “older man”, my fellow geezer of the 2010 class.

Actually, friendship doesn’t come close to describing the bond Mike and I formed. We both had lived in Ohio when we were in school, not too far from each other. We had the same sort of adventures, growing up. And we both were old school, addicted to the same authors. We read the same books, had the same dreams, of someday writing science fiction. And we each had stories published in a major SF magazine while we were at Clarion West.

Life had gotten in the way for both of us. Jobs. Marriages. Family. But neither of us had ever given up the dream and now, in our mid-sixties, the time had come. Afternoons, after the critique sessions, we would sit and talk of our philosophies of story. We would dissect plots, discuss character development; even began to talk about a collaboration.

It was a manna that sustained both of us. Mike liked to say he was my younger brother (six months) from another mother. I’d smile and agree. I liked the notion of a brother who shared my passion for reading and writing science fiction and fantasy.

But there was a hang-up. Mike had cancer, and although it was managed, it hadn’t gone away.

Even so, life went on. We finished Clarion West and went back to the real world. He lived in northern Oregon, and neither of us survived travel the way we used to, but we stayed in touch by telephone and Skype, critiqued each other’s work — and began to make plans for that collaboration.

I met Mike’s wife, Sheila; Mike and Sheila met my partner, Rachael. We hung together at conventions — Rustycon, Norwescon, and Orycon. Went to dinner now and then.

And the collaboration grew. It would be set on the Moon in the late 1970s. An alternate world where the United States hadn’t given up on space. The notion grew, turned into a trilogy of novellas that we planned to pull together into a novel, after all three had been published.

The first story became a murder mystery, set in work colony that supported the construction of a Mars-bound vehicle being built in lunar orbit. We weathered setbacks. He fought the thing growing inside him and I dealt with coronary problems.

But paragraph by paragraph, the story grew, and then, at eighteen thousand plus words, “The Moon Belongs to Everyone” was finished. I told Mike it was a winner, that Stan Schmidt at Analog was sure to buy it, that it would be a cover story. Mike humored me.

He replied a day later. “I just saw ‘The Moon Belongs to Everyone’ in my in-basket and look forward to reading it.”

Two months later, this came back. “I’m buying ‘The Moon Belongs to Everyone.’ Expect the December 2012 issue.”

We received our author copies of the magazine in late September 2012. Our names were on the cover, top billing, and “The Moon Belongs to Everyone” was lead-off story with two-page art.

“How did you know that?” Mike asked me, via telephone.

“I just had a feeling,” I replied.

We celebrated together in early November 2012 at Orycon 34 in Portland. Mike and I jabbered all weekend about the second novella, “Pie in the Sky,” which we had started; Sheila looked on, smiling and knitting the whole time.

I had another of those feelings. “I’ll be there soon as I can,” I said.

Six hours later, I arrived in McMinnville. Mike grinned when I walked in. We talked for a couple hours, Me, Mike and Sheila, and some friends of theirs. Then Mike grew tired, and the friends left.

I sat up with Mike most of the night, while Sheila grabbed some much-needed sleep. And I was there, with the two of them, next morning when he died.

Mike Alexander was the kindest, gentlest man I ever knew. He was generous and funny and saw the best in everyone. And he fought one hell of a battle against that bastard, cancer.

It’s been six months. I miss my friend so very much. I miss our chats. I miss the jokes, and I miss the stories we’ll never write.

Most of all, I miss my brother. 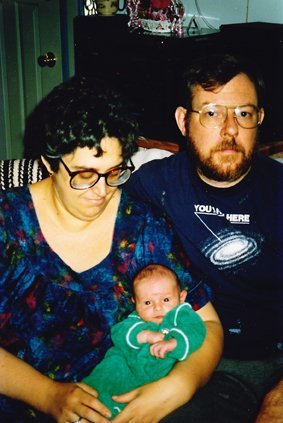