The Sally Klages Memorial Instructorship will be awarded in 2018 in memory of Sally Klages, with love from her sister Ellen Klages.

“Sally was a writer. I never heard her say that she wanted to be one; she simply proclaimed, proudly, that she was. She wrote every day in tiny, cramped cursive: working on her autobiography, lectures to her Invisible Friends, instructions about how life ought to be led.

Like many of us, she owned dozens of notebooks and countless pens, and was never without them. She once packed a gallon-sized Ziploc bag of pens and markers into her carry-on bag for a two-hour flight, “in case one runs out.” Writing was her joy, her recreation, her solace. 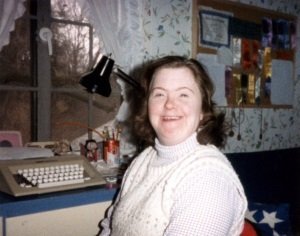 Sally was born with Down Syndrome. As far as she was concerned, that wasn’t a handicap — it was what made her special. And she was. She was Valedictorian of her class at Northeast Training Center, and an employee at Columbus State University for 17 years. She was one of the founding members of the Down Syndrome Association of Central Ohio (DSACO), she was on the board of the National Down Syndrome Conference, and was a featured speaker there in 1989. An active participant in the Special Olympics, she won more than three dozen medals in swimming, diving, track and field, bowling, and cross-country skiing.

Her smiles, laughter, joy, and enthusiastic hugs were legendary.

Sally died in 2016, at the age of 55. It would have made her very happy — and very proud — to know that she is helping a new generation of writers find out how special they really are.”