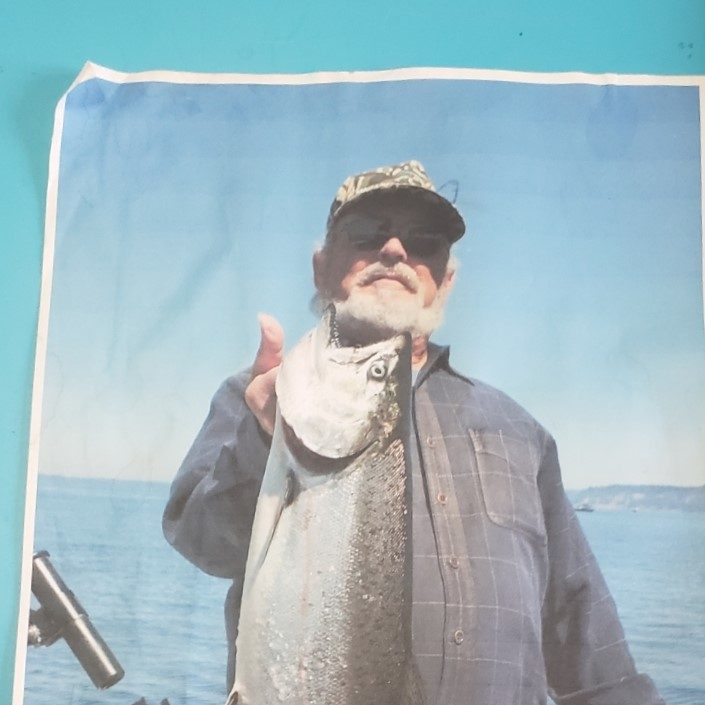 “I’m always happiest when I’m killing things.”  That’s how Bob Brown captioned the accompanying photo when he gave it to me.

I don’t think this self-appraisal of his was completely accurate.  At least, it wasn’t just killing things—fish, to be specific—that made him happy.  Bob adored fishing, yes, and he went on at least two fishing expeditions every year: to Alaska, to the Washington coast, to anywhere he thought he could have fun making a good catch.  Over the years that I worked for Bob, I received many a tasty tuna steak and halibut fillet carved from his trophies.

But he had plenty of other sources of happiness.  A love of books was one big pleasure he and I enjoyed in common, and one you probably share as well.  Among his special areas of interest were science fiction, fantasy, and other imaginative genres, making the ties binding us together that much realer.

I first met Bob sixteen years ago, while I was researching an essay on E. Nesbit.  Eileen Gunn listened impatiently as I bemoaned my problems tracing the lines of influence running between Nesbit and other authors of 19th-century ghost stories.  Then she declared, “You need to talk to Bob Brown!”  She was absolutely right.  When I showed up at his small-but-treasure-filled store, Bob gladdened my ears with everything I wanted to know, plus a few other tidbits of literary history I hadn’t realized were missing.  And I could tell he had a great time doing so.

Soon after that initial encounter, Bob hired me to work in his store every Thursday, and to fill in for him whenever he left town to go fishing, bookdealing, and exploring local cuisines from Paris to Antarctica.  Though “B. Brown & Assoc.” was in some ways a sort of a hobby he indulged in during his retirement—Bob’s original career was in advertising—it was a hobby he took very seriously.  Wrapping books to be mailed was an intricate, precise, carefully considered process.  The way he priced his stock was thoroughly professional, backed up by shelves of reference books and Bob’s many years of experience.

Through his store, in addition to making his own deep well of knowledge accessible to his customers and the SF community at large, Bob provided a place for us to exchange recommendations and mutually infect one another with our enthusiasm for the field.  And with his generous and unfailing employment of me for one-and-a-half decades, he made it possible for me to pursue and succeed in my writing.  I miss him.  In his memory I wish everyone who ever knew him every kind of happiness there is.

We are now accepting applications to attend Clarion West’s intensive Six-Week Summer Workshop for writers preparing for professional careers in speculative fiction. Held annually in Seattle since 1984, the Clarion West Summer Workshop has produced some of the most exciting and influential writers and editors in the field, including Gordon Van Gelder, Vina Jie-Min Prasad,…

Clarion West is delighted to announce the names of the instructors for the 2015 Six-Week Workshop. Applications will open in December 2014. More information about the instructors and application instructions will be posted in the coming weeks. Andy Duncan  2015 Clarion West Leslie Howle Fellow Eileen Gunn Tobias Buckell Connie Willis Nalo Hopkinson Cory Doctorow  2015…

It’s book birthday time! On February 9, we celebrated the release of the Pocket Workshop, a collection of more than two dozen essays by Clarion West instructors and alumni that delves into the art and craft of writing as a way of life. Order your copy from Hydra House today. Proceeds of the sales benefit Clarion…

The Development and Outreach Coordinator is a part-time development position responsible for the care and coordination of key relationships including, but not limited to our volunteers, grantors, and donors. This position involves specific administrative tasks, development and implementation of annual giving strategies, and working closely with the Executive Director (ED) and Art & Communications Director…

Dear Clarion West Community,  We have been working closely with this year’s class and instructors on what options are the best for them individually and as a cohort. With everyone’s safety in mind, we have been discussing a range of options. Our final decision is to push back our schedule and hold this year’s class,…